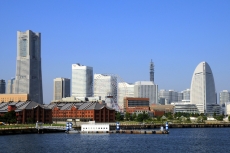 Just a short train ride from Tokyo, Japan’s 2nd largest city is well-known for the sea breezes and newly renovated bay area. It also has a wealth of other attractions.

When Japan finally opened to trade in the mid 19th century, westerners began to take up residence on the Yamate Bluff, where European-style buildings and a foreigners’ graveyard can still be found today. A few museums and the Harbor View Park (Minato-no-mieru-oka Koen) overlook the bay from here, and the Motomachi shopping street is only a short walk away.

During the Meiji period (1868-1912), Chinese traders began to settle in what has now become the country’s largest China Town. While dining at one of the neighborhood’s world-class Chinese restaurants is a must, the Kanteibyo is also well worth a visit. This temple’s vibrant colors and exquisite details is startling after becoming accustomed to the modest decor of Japanese shrines.

1 min. from Motomachi-Chukagai Sta. on the Minato-Mirai Line
Yokohama Chinatown

Yokohama’s bay district feels spacious in spite of the ubiquitous skyscrapers nearby. The Landmark Tower rises above the office buildings, shopping complexes, theme park, and the Yokohama Red Brick Warehouse.

A number of recreational facilities including the Yokohama Arena, Nissan Stadium and Shin-Yokohama Park can be found in the area around Shin-Yokohama Station. If you are looking for something a bit different, try the Ramen Museum located only a short walk from the station.

Get off at Shin-Yokohama Sta. on the JR Yokohama Line (and the Tokaido Shinkansen) or Yokohama City Subway Blue Line.
Shin-Yokohama
See also: