With one of the lowest crime rates of all developed nations, Japan is an extremely safe country to live and travel in. In comparison to other major world cities, there is a very low chance you will be a victim of confrontational violence in Tokyo, even when walking alone at night. Cultural norms, legal restrictions and strict enforcement of illegal possession of firearms, weapons, and drugs have resulted in traffic accidents becoming the biggest threat to physical safety. Crime is not widespread enough to justify constant fear, but that does not mean you should discard common sense while you’re in Japan.

Districts in Tokyo with a reputation for higher rates of crime include Roppongi, Shinjuku (esp. Kabuki-cho), Shibuya, and Ikebukuro, though caution should be paid in all entertainment and nightlife districts in Japan. Confrontations are rare but do happen. While there are several high-profile homicide cases and other extreme crimes covered in the media each year, along with low-profile crimes or cases that go unreported, the majority of incidents are petty crimes related to theft, and non-violent crimes such as fraud. Break-ins and burglary do take place frequently, so doors and windows should be kept locked. Bicycle theft is by far the most common crime, and is often more prevalent in residential areas than in city centres, so bike locks are strongly advised.

Both groping (痴漢行為, chikan-koui) and unauthorised, inappropriate photography and filming (盗撮, tousatsu) are problems associated with train travel and living in residential or isolated areas. Some areas have responded to past cases by posting signs such as “beware of groping” (チカンに注意). Several train lines have introduced pink “Women only” cars (女性専用車, josei-senyousha) during rush hours, aimed at those worried about unwanted physical contact.
Despite the prevalence of certain forms of crime, honesty is policy for the general population and “finders keepers” does not apply in Japan. Tokyo citizens hand in billions of yen in lost cash each year, often waiving their right to receive the money if nobody makes a claim. Around 3/4 of the money is returned intact to the rightful owners, as are wallets, phones, and other personal belongings. The orderly conduct of Japanese citizens was widely applauded in international media coverage of the aftermath of the March 11 2011 earthquake disaster. That said, keep in mind that looting and violence are not foreign to the country, and ideas of “safe Japan” are best kept in check.

See also: Map of Crimes, based on crime statistics (Japanese only, compiled in January each year) 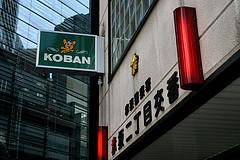 Police in Japan are based out of Police stations (警察署, keisatsu-sho) and Police kiosks, known as kōban (交番). Kōban are manned 24/7 by officers working in shifts, and handle such things as lost & found objects, giving directions, automobile accidents, and criminal cases. Policemen or patrolmen are called “omawarisan” (おまわりさん) and patrol the neighborhood on white bicycles or motorbikes. The fact that policemen are such a common sight in Japan goes a long way to explain the low rate of crime.

Debito.org
A useful summary of your rights as a foreigner in Japan regarding I.D. checks and police encounters, compiled by American-born naturalized Japanese citizen Dr. Arudou Debito.