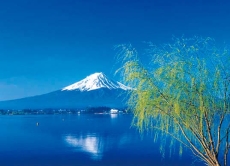 It is not only the highest mountain in Japan, but is also a famous symbol of Japan. Many people like the thought of climbing Mount Fuji, although it is not easy and can only be climbed during July and August. Station 5 (2,300m) can be reached by foot or by car via the paved roads. However, if you plan to climb to the summit, proper hiking equipment is crucial. Mt. Fuji and surrounding areas have been registered as World Cultural Heritage in June 2013.

The beautiful reflection of Mount Fuji on Lake Kawaguchi is sometimes called “Reversed Mount Fuji”. This image is often reproduced in print.