Perhaps the most evocative of Japan’s annual matsuri (祭り, festivals) , tanabata (七夕) marks the beginning of the summer festival season. Closely linked with the stars, tanabata is celebrated by the writing of wishes on strips of paper, which are tied to the branches of bamboo plants.

Tanabata has been a major festival in Japan for at least four hundred years. It marks the period when the stars kengyūsei (牽牛星, Altair) and shokujosei (織女星, Vega) are visible high in the sky, and is based on a story from Chinese folklore. According to the tale, the princess Orihime (織姫), daughter of the Sky Emperor (天帝, tentei) wove kimono for the gods by the River of the Skies (天の川, amanogawa – the Milky Way). As she was feeling lonely, the Emperor arranged for Orihime to marry Hikoboshi (彦星), a cowherd. Instead of settling into an organised domestic routine, the newlyweds were so swept up in their romance that they neglected their duties; Orihime stopped weaving kimono and Hikoboshi’s cows ran rampant across the skies. Angered by their irresponsible behaviour, the Sky Emperor separated the couple by forcing them to opposite banks of the River. Seeing Orihime’s sadness, however, he agreed to allow the couple to meet once a year on the 7th day of the 7th month. Their meeting is facilitated by magpies, who spread their wings across the river to create a bridge. However, if it rains on the appointed day, the river is said to overflow, preventing the magpies from making the bridge and forcing the couple to wait another year.

Tanabata is most widely celebrated on the 7th July each year, though due to the switch from the old lunar calendar to the Gregorian solar calendar and regional traditions, it may be celebrated any time between early July and mid-August. During this period the stars Vega, representing Orihime, and Altair, representing Hikoboshi, can be seen in the night’s sky.

Before the festival, children (and some adults) write wishes on strips of paper that are tied to bamboo plants, often in public areas in villages, towns and cities. It is common for wishes to reflect one’s ambitions, such as success in a chosen career. In some areas, the wish papers are burned after the festival, and fireworks are also common.

Celebrations associated with tanabata differ from region to region, though competitions for decoration design are a common theme. In Tokyo, one of the biggest tanabata festivals takes place in Suginami ward’s Asagaya district in early August. The shopping streets (商店街, shōtengai) are heavily decorated for the occasion, not just with the traditional bamboo, but with large papier-mâché figures. These models often feature popular characters from film and animation, and each year prizes are given for the best designs. 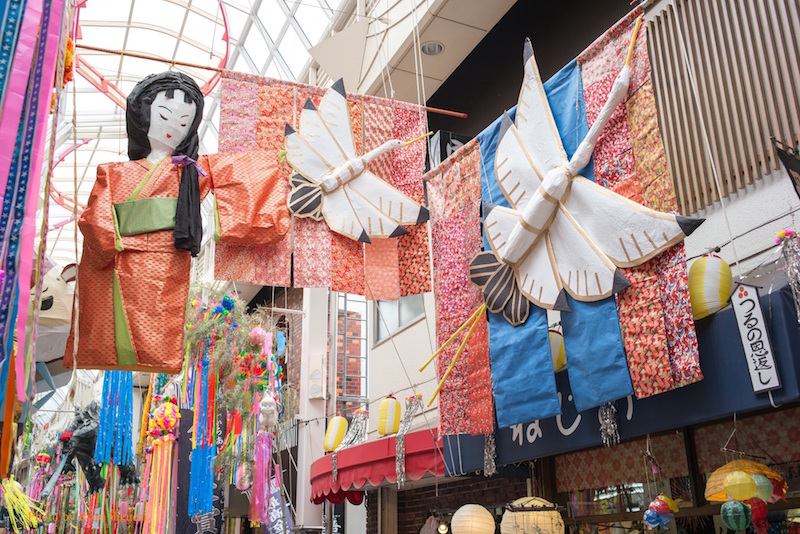 The following is a list of some other areas with special tanabata celebrations:

(Anjō, Aichi Prefecture – August 7th-9th) – the third of the three main tanabata festivals in Japan, the Anjō festival is based on a different theme, and includes a “Miss Tanabata” parade in addition to its impressive decorations.
Website: Anjō Tanabata Festival (Japanese only)

(Hatamono Shrine, Katano City, Osaka Prefecture – July 6th-7th) – at this shrine dedicated to Vega (Orihime in the tanabata legend), the bamboo wish decorations are particularly elaborate, and there is a portable shrine procession on the afternoon of the 7th.
Website: Hatamono Shrine Tanabata Festival