Leaving Tsurunoyu Onsen, we travelled further into the mountains. After about 30 minutes, we suddenly caught sight of the blue of a lake through the spaces in the trees. As the car left the mountain forest, our field of vision opened and the whole of the lake appeared before us. Inside the car, we let cries of excitement gush forth. The cobalt blue of the lake, surrounded by a magnificent range of mountains, and the deep blue skies with white puffs of clouds looked just like a painting. It goes without saying that this is one of Akita’s most famous places and, at 20km around, and 423.4m deep, Tazawako (田沢湖) is the deepest lake in Japan. In the summer season, the area is lively with boaters and water-skiers and in winter, the lake is wrapped in a mystical atmosphere – although it is in snowy, northern regions of Tohoku, it does not freeze. 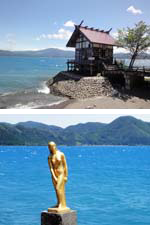 Places that shouldn’t be missed when visiting Lake Tazawa are Ukigi Shrine (浮木神社) and the statue of Tatsuko (たつこ像). The plain wood construction buildings of Ukigi Shrine, which lie near an inlet at the end of Lake Tazawa, has also been called Kansagu, after being given the name in 1769 by Daimyo retainer Masudo Soshu. Next to the shrine is a gold colored statue of Tatsuko, which is based on the legend of Princess Tatsuko. According to the legend, Tatsuko prayed to Kannon to preserve her youthful beauty however, when Kannon instructed her to drink from a certain well, she was instead changed into a dragon. From that point forward, the dragon Tatsuko became the queen of Lake Tazawa.

Viewed from afar, Lake Tazawa appears as a sapphire nestled amidst the mountains. On a closer view, one can make out white waves from the gentle winds that blow through, and the lake sparkles, opaque, in the sunlight. I was moved by the soft purity and beauty of this indigo lake and would love to visit this place again.

Developed as a castle town for Kubota han, (present day Akita Prefecture), in 1620, and known as a “Little Kyoto” because of the refined elegance of its old sections of town, Kakunodate (角館) is a popular tourist spot in Akita. Here the former residences of samurai are still standing and make for a beautiful setting throughout the four seasons. Spring here is said to be especially beautiful when around 400 cherry trees, each over 300 years old, which line the street, bloom. Throngs of people come to view the flowering blossoms which dye the town with their color. As our visit was in July, the town was relatively quiet and relaxed. The contrast between the black fence walls and fresh green of early summer was quite beautiful. 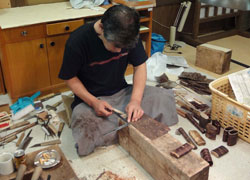 The Kakunodate Traditional Birch-craft Center, introduces the local area’s history, as well as the town’s traditional handicraft, birch wood products. Here you experience the charm of birch craftwork as you watch craftsmen make their pieces.

A visit to Akita is a wonderful chance to get away from the clamor of the big city and relax from the exhaustion of daily life. Whether it’s being healed by the famous spring waters of Misato-cho, washing away one’s weariness in the baths of Nyuto Onsen, enjoying the fresh fish or other local dishes, taking in the bounty of nature at Lake Tazawa, or experiencing the magnificent scenery and history of Kakunodate, a trip to Akita has something to offer for everyone.