Sumo – an iconic sport that epitomizes Japan’s image internationally just as much as sushi; what other sport is as linked to just a single country, but known so widely throughout the world? And “known” may be just the right way to put it. Say “sumo”, and the same comic image of two very fat men in a diaper-like loin cloth is sure to pop into your head. And when asked how the game works, many would be pressed to say anything more than “to push the other guy out of the ring”. There is good reason for this – the rules are few and mostly self-explanatory.

A wrestler wins a match when his opponent crosses the rope lining the outside of the ring or touches the ground with any part of his body other than his foot. Besides some illegal techniques (biting, eye gouging, etc.), everything else is fair game. Two wrestlers, for instance, who are stuck in a holding position will not be stopped, no matter how long it takes for one of them to make a move. In most cases the presence of a referee seems unnecessary – everyone knows who the winner is. 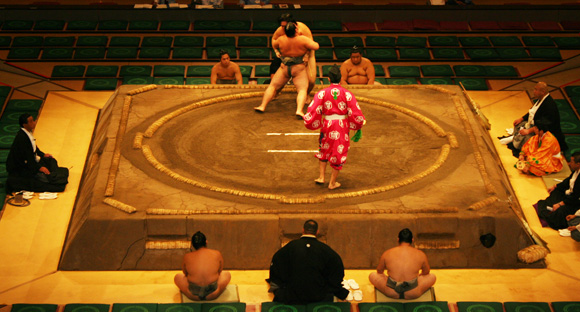 The match and tournament structure is also straightforward. There are six tournaments held throughout the year, each lasting a total of fifteen consecutive days. There are a total of about 660 wrestlers in active competition. Wrestlers in the highest divisions have one match a day, while those in the lower rank wrestle every other day. At the end of the tournament, the wrestler with the most matches won in his own division is the division champion.

What the sport lacks in complexity in play itself, is richly supplied through pageant displays of tradition. Everything in this sport has come to follow a strict ritualized structure: from the movements of the wrestlers as they face each other down before the start of the match, to the chants of the referee as he introduces them, and even down to the daily regiment that the wrestlers are required to perform. Before each match, the colorfully adorned referee will introduce each wrestler, along with his training stable and team, through a long drawn-out chant that is reminiscent of those that can be heard at any temple in Japan. When the two men take their stances in the ring, the match does not start until both are touching the ground simultaneously. There are usually a number of false starts, after which the wrestlers face the audience and start slapping themselves on their thighs and face, apparently in an effort to get pumped up for the match. Both wrestlers will grab handfuls of salt and chuck it across the ring – a ritual originating in the days when the sport had close links with Shintoism. Once the wrestlers actually begin their bout, the whole thing is usually over within seconds. Loud cheers, a mutual bow of respect between the wrestlers, and then the whole operation repeats itself.

One would think that this slow-paced sport would have a tough time in competing for the attention of a national audience. Yet the sport is loved far and wide by those in Japan and around the world thanks to the magnificent show created through a combination of simple play and elaborate theatrics. Seeing sumo played live is an unforgettable experience, and it can only be seen at a professional level here in Japan.