If you’re asked to a Japanese wedding

June in Japan is a month with a lot of weddings. Though the image of a sunny wedding may be at odds with a season of perpetual rain and clouds due to the ‘plum rains’, as you might expect many women long to be ‘June brides’ and it’s a season so busy it’s incredibly difficult to find a venue. From the most popular chapel service and the traditional Shinzenshiki Shinto affair to restaurant and house weddings, there are many styles of services, yet here we’d like to introduce you to the most common wedding service in Japan, and what you should know if you’ve been invited to attend one.

Both Western and Shinto wedding services are the most popular in Japan, and lately, the popularity of civil services is rising dramatically.

Those exchanging vows in a chapel service, while naturally some may be Christian, in most cases do it primarily for the appearance, and those who have wedding services in chapels rarely do it for religious reasons. The couple wear a wedding dress and tuxedo, stand before a pastor or priest, and hymns are sung.

Shinzenshiki (神前式) are wedding services held on shrine grounds. At the shrine, a Shinto priest officiates the service and prayers are offered. The bride and groom then perform the Sansankudo, wherein they each drink from nuptial cups of sake, after which they offer a branch of Sakaki, known as Tamagushi, to the gods. This concludes the ritual. The bride and groom wear traditional Japanese dress: the groom wears a Hakama bearing his family crest, while the bride wears a pure white kimono called a Shiromuku.

In a Jinsenshiki (人前式) (also called Hitomaeshiki), or civil service, instead of standing before a pastor or Shinto priest as in the services above, the bride and groom are joined in a ceremony where the guests serve as witnesses. It can be either Japanese or Western, and the contents of the ceremony are completely up to the couple. As it has no religious meaning, it cannot be held in a church or temple, but as a matter of appearance, a pastor or choir may be there, and the Sansankudo (三々九度) may be performed. Many couples opt to have their guests sign the marriage certificate as evidence of their marriage. No matter which style of ceremony, a master of ceremonies is often present to keep the event moving.

As far as venues go, aside from churches and shrines, locations specializing in weddings such as hotels and restaurants that double as wedding venues are the most common. In some cases the ceremony is just for close family and friends with just a small handful of people where, in some other cases the number of guests can exceed 100. The number of invitees displays a regional characteristic, and while in some places this means around 300 people, people say that the usual range is between 60-80. 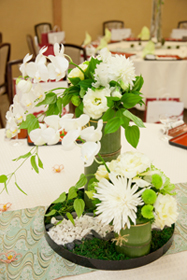 A wedding ceremony begins with the exchange of vows, and as mentioned above, this can be either in a Western, Shinto, or civil service. After this the photography cuts in before the Hiroen wedding reception. Hiroen (披露宴) takes place in a banquet hall where, beyond the bride and groom mingling with guests while enjoying food, there are situations where the background and profiles of the couple are introduced. It is quite common for some light entertainment to be provided by guests and even professional entertainers. Depending on the people, the bride and groom may leave their seats either once or twice during the reception in order to change clothes and come back, in what is called Oironaoshi (お色直し) (lit. “a change of color”). Brides who wore a wedding dress to the chapel may change into kimono, and those who made their vows in Shiromuku might reenter the venue in a dress – many people mix Japanese and Western.

Once the two and a half hour reception finishes, people leave the venue and move on to another place, such as a restaurant, in some cases having an Nijikai (二次会, afterparty ), or even an Sanjikai (三次会, after-afterparty). The afterparty is a hostless event planned so that, say, managers who are also your friend, can attend. While some people continue on from the Hiroen to the Nijikai, others come only for the afterparty. If you’re invited to a wedding that doesn’t necessarily mean you are obliged to attend the afterparty; even if you choose not to go, it won’t be a gross faux-pas.

Here are some basic things for guests to know about weddings in Japan.

Invitations and how to RSVP

If an invitation has arrived, there will be a card inside you send back in order to RSVP. There are manners to writing your reply, and what’s most important is to clearly convey whether or not you will be attending. It is customary if not attending to send Goshugi (see below) or a wedding gift. 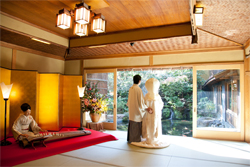 Recently, wedding guests can wear whatever they like to wedding ceremonies. While men in formal attire (semiformal, which in Japan is a black suit) with a white tie had been the norm, now people in suits other than black, and with colored ties, are not uncommon. Women mainly wear dresses, usually knee-length. Some people prefer to wear a long dress if the ceremony or reception is in the evening. Whatever the wedding style, it is best to avoid showing any shoulder. Should you be wearing a dress that reveals your shoulders, you should cover them up with a shawl or a bolero. Black is not out of the question, but clothes with a bit of color help to make the venue more vibrant and enjoyable.

For men and women, so long as you avoid white clothes, black ties, and things which are too casual or outlandish, you should be fine. 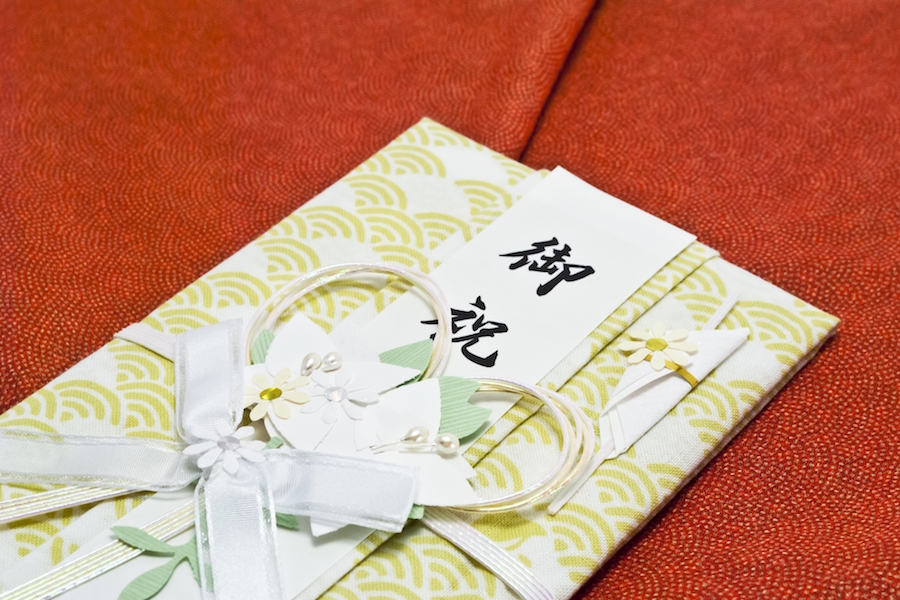 It is the custom and courtesy for guests to bring gift money called Goshugi on the day of the wedding. You do not hand it directly to the couple, but leave it with the receptionists when you arrive to the ceremony.

Gift money has several rules including the amount. For friends and colleagues of the couple, the average amount is 30,000 Yen. If you are his/her boss or a relative, 50,000 to/or 100,000 Yen is common, and the same applies if you are attending with your spouse. When your own sibling is getting married, whether you give or don’t give the money to the couple greatly varies depending on the local custom. While the amount of gift money is not fixed, it is the custom to avoid numbers starting with even numbers such as 2, 4 and multiples of these, since these numbers relate to the idea of being split (10 and 20 are ok).

Bills should be crisp new without stains, markings or folds. The bank teller should be able to help you with this, or an easier and faster alternative is to go to the change machine at the ATM room at bank branches (small ATM stands may not have this service). When you have the bills ready, insert them in a special envelope called Goshugi-bukuro, and write your name on it.

When you arrive at the banquet hall, you will find a bag on or by your seat. This is called Hikidemono (引出物) and is a gift for guests to bring back home. In most cases there is a box of confections inside too, called Hikigashi. Hikidemono and Hikigashi are both gifts from the newlywed to thank the guests for coming to celebrate their marriage, and to share the happiness. The most common items for Hikidemono are tableware, but recently gift catalogues which the guest can choose a gift from the catalogue and have it delivered to his/her house is becoming more and more popular.

In many Japanese calendars you will find short words printed under the dates. This is called Rokuyo (六曜) which is a six-day calendar that predicts good and bad luck of the day. Rokuyo is most referred to when planning a wedding or a funeral (and when buying lottery tickets) but is otherwise not given much attention to in ordinary life.
The luckiest of the six is Taian (大安) and is usually written in red. It is said that anything done on this day goes well and therefore it is the most popular day for weddings. Another popular day for weddings is Tomobiki (友引) because the characters “friend” and “pull/draw” is related to the idea of sharing happiness. However, the same Tomobiki can also mean bad luck if somebody has deceased, because then the same characters can be associated to the thought of a friend being pulled towards the deceased. Thus, funerals are avoided on this day. The unluckiest day of all is Butsumetsu (仏滅) and is the most unpopular day for weddings (although, people who don’t believe in it have their weddings on this day and some venues have Butsumetsu discounts). The other days are Sensho (先勝) which is good luck before noon and bad luck after noon, Senbu/Sakimake (先負) which is the opposite of Sensho, and Shakko (赤口) when the only lucky hours are between 11am-1pm and the rest is bad.