If Noh (能) represents Buddhism and high art, and Kabuki (歌舞伎) the secular theatre, Kagura (神楽), and specifically Satokagura (里神楽), is the theatre of Shinto and of the countryside. Because of this, it seems fitting that tonight’s performance, while although not held at a shrine, is being held at the Saitama Kaikan – a community art center, an unimposing structure with an inviting atmosphere. With tickets available for only 1,000 Yen, the feeling that this is a folk event, welcoming all of the general public, is even more apparent. This August 31st performance is sponsored by the Edo Satokagura Student Committee, an organization of college students from around Kanto who, along with the performers of the Maeda Satokagura Preservation Society, share an interest in preserving one of Japan’s oldest traditional stage arts, and sharing it with the public.

The play starts and people’s cameras flash as an actor flashes his mask in their direction, revealing a scowling face with eyebrows pointed upward with ferocious intensity. He holds this pose for just a second, before continuing on with his dance, but the photographers, not apt to miss a chance, have already snapped four or five photos. Now they wait for the dancer to take his next pose, with which they hope will accurately capture the mood and intensity of the night.

Although shrines dot the Japanese landscape, those with a stage are relatively rare and those with a stage that is actually used is even rarer. If one carefully follows their local shrine’s schedule of events though, it might be possible to find an event at which Kagura will be performed. The amount of people that have gathered, waiting intently with their cameras in hand, at the Saitama Kaikan for tonight’s performance, attests to the fact that, for many, seeing a Kagura performance is a special event. 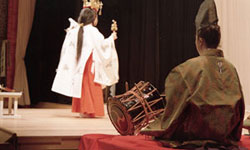 As the lights dim and the stage is bathed in light, a single dancer emerges wearing the white mask of a woman. This is the miko, the shrine attendant, who will perform her dance to both purify the stage, and call on the gods to make an appearance. While from here, the gods appear in the preceding acts, a small alter is present at the front of the stage throughout the play and, even the gods make gestures as if presenting an offering. This then helps create a duel image that is left lingering with the audience – the feeling that the whole play has been both a form of offering to the gods and, at the same time that the gods have actually been present there, dancing through the dancers.

While the third act featured a well known myth from the Kojiki, it was the second act that left the greatest impression and, judging by the sound of camera shutters snapping shut that echoed through the concert hall, the audience felt the same way. The second act, known as Sumiyoshi, the god of water, was danced by three water gods – the god of the shallows, the god of the middle regions, and the god of the deep oceans. The variety of masks, the dance of blue fans, representing the waves of the ocean, and the pulling back of multiple layers, signifying the different hierarchy of the gods, worked together to make the second act the most memorable.

After the concert is over, the lights in the concert hall go up and the audience is once again back in the present and the big city. For a two hour time span, however, our grasp on time weakened just a bit and, forgetting all our modern conveniences, we watched this message from the past dance before us.