Sado Island might appear small on the map but its separation from the mainland, as well its diversity of terrain and abundance of nature make it seem much larger than it looks. From the port in Niigata – two hours by Shinkansen or around five by bus from Tokyo – the island is a about a two hour ferry ride from the mainland.

Because of infrequent buses and the lack of a train system, it can be an adventure to get around Sado. While it is possible to rent a car, as many tourists do, many others choose slower methods of transportation to get around such as bicycle, or simply go on foot, hiking through the inland hills and mountains of Kinbokuzan or Myokenzan. Especially with one of these latter methods, the true distance required to navigate the island quickly becomes clear. Additionally, a variety of coastal and mountainous landscape, lends distinct atmospheres to different areas of the island, and further enhances the large feel of the island. 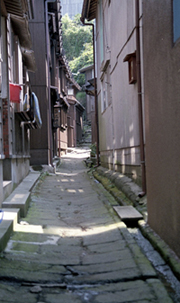 Historically, Sado has been famous for being a mining area, a nature preserve, and a place of exile for political or religious figures. Today, the remnants of much of this history can be seen, especially in the seaside town of Shukunegi (宿根木) and the mines at Kinzan. During Japan’s Middle Ages, Shukunegi contained 1/3 of the island’s wealth, and was active as a ship building port. Much of the lumber from ship building was also used to build houses which can still be seen standing today. Tiny alleys wind through two and three story wooden structures, their roofs still held down with carefully placed rocks. Alongside the stone paths, streaming mountain water rushes through small canals that, until recently, supplied the town’s water.

A short trip inland from Shukunegi are the mines at Kinzan, active from around the 15th century up until as late as the Meiji Period. This popular tourist spot offers a history museum with interactive displays and models, as well as trips into the mines, and gives visitors a sense of the grueling conditions that miners worked under.

While minshuku (民宿, private lodgings) can be found scattered throughout many of the towns there are few large hotels to be found. For those interested in the outdoors though, Sado is also an ideal spot for camping, with sites lining the beaches and hilly interior. One site, Futatsugame , at the tip of the island, for example, offers spectacular views of the offshore rock formations and a chance to view a sunset here will make roughing the outdoors for a night well worth it.

The relatively unchanged coastal villages, pristine beaches and wildlife, and the sense of isolation that envelops the island are bound to leave an impression on any visitor to Sado. While the Edo Era houses at Shukunegi offer an excellent example of past life on the island, it is equally interesting to observe that many of the other, still active fishing villages are nearly identical in architecture. It is no surprise that the once nearly extinct national bird of Japan, the toki, is being preserved on the island – it is, in many ways a floating capsule that has remained free from the passage of both time, and human interference.