(original photo by Luftphilia; CC BY 2.0)

The ancient monuments of Kyoto are world famous and one of Japan’s most beloved sightseeing spots. The Kiyomizu Temple (清水寺) as well as Kinkakuji (金閣寺, golden pavilion) in Kyoto City, Byodoin (平等院) in Uji City and the Enryaku Temple (比叡山延暦寺) in Otsu City are all among the 13 temples, 3 shrines and 2 castles that have been designated as World Heritage Sites. In addition to the architecture of the shrines and temples, the garden scenery including the stone garden at the Ryoanji Temple (龍安寺) and the moss garden of Saihoji Temple (西芳寺), more commonly known as Koke-dera (moss temple) represent the traditional side of Japanese culture. 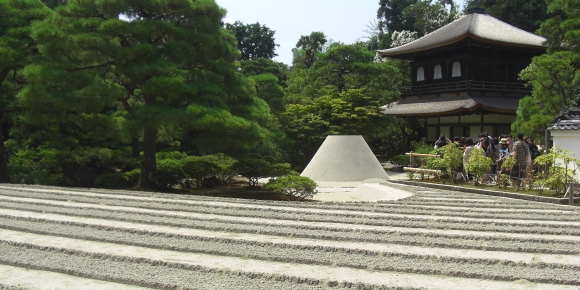