The Dance of Fools – Awa Odori

If you visit one of the many festivals held across Japan this summer, chances are you will hear the distinctive Awa Yoshikono, played on shamisen, taiko drums and flute, and heralded by the striking of a kane bell. This is the music of Awa Odori, the most popular of the traditional “bon odori” (盆踊り bon dances) performed during the summer as part of the obon (お盆) festival for the dead.

Awa Odori comes from Tokushima Prefecture on the island of Shikoku. “Awa” is the name of the feudal province which later became Tokushima. There are tales of Awa Odori originating in the 16th century after drunken revellers took to dancing in the streets of Tokushima in celebration of the completion of Tokushima Castle. While there is no firm evidence to support this, the exuberant, sometimes frenzied nature of the dance is in keeping with the story’s theme of drunken revelry. Traditional lyrics to the music used for Awa Odori translates to “The dancers are fools and the watchers are fools; if both are fools, you may as well dance”.

Tokushima’s Awa Odori festival runs from the 12th-15th August and, attracting well over a million visitors every year, is one of the largest dance festivals in the world. Its popularity has allowed it to become the best-known of the bon dances. Thousands of ren (連, dance groups) gather in Tokushima City and perform in the streets over the course of the festival. 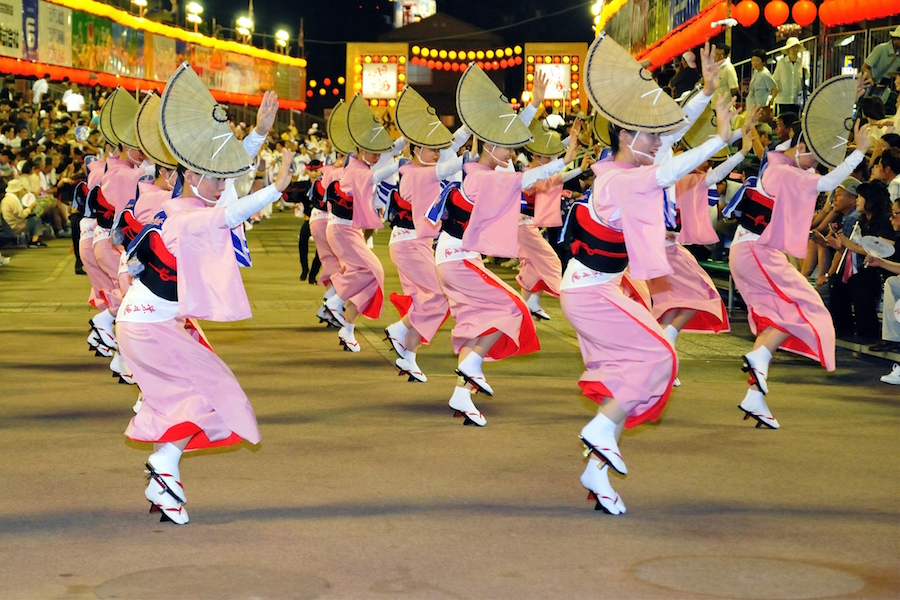 There are two forms of dance performed within Awa Odori – the men’s dance, otoko-odori (男踊り) and the women’s dance, onna-odori (女踊り). While otoko-odori is performed by men and women alike, onna-odori is performed by women only. Most ren are made up of both types of dancer. The onna-odori dancers wear yukata (浴衣, a light summer kimono), a straw hat, and geta (下駄, wooden sandals) on their feet. For otoko-odori, dancers wear either a yukata, tucked in at the bottom, or a happi (法被, a short, light festival coat) with shorts, and wear only a special kind of rubber-soled tabi (足袋, traditional sock) on their feet. Clothing is often branded with the name of the ren. While onna-odori dancers stand tall and elegantly for their dance, otoko-odori is more wild, and dancers bend their knees and keep their bodies low as they proceed. Each ren has its own musicians who play the Awa Yoshikono, and there is usually also a dancer carrying a paper lantern with the ren’s name at the front of the group.

Some ren have a long history, and members practise all year round in preparation for the festival. Others are less formal, and practice only in the summer months. There are ren formed by community groups and others sponsored by national companies or made up of staff and customers of local businesses. The suffix “-ren” is used for all groups, and its meaning of “unable to” in the local dialect is used for wordplay in group names. One group which annually welcomes over a hundred non-Japanese amateur dancers is called Arasowa-ren (あらそわ連), meaning “cannot/will not fight”, emphasising its goal of international cooperation. 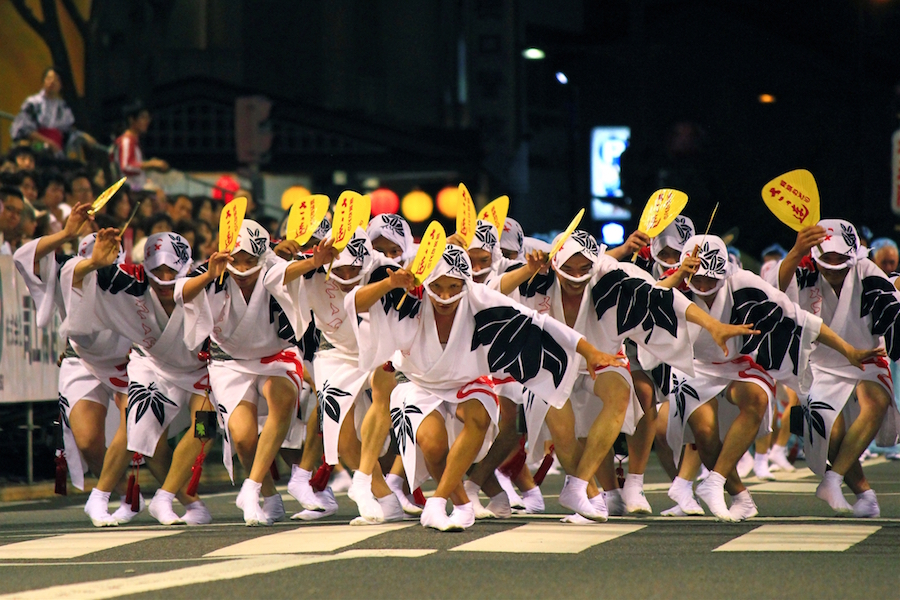 In the run-up to the festival, most of central Tokushima City becomes a venue for the dance. The grandest “stages” have viewing stands constructed on two sides, and tickets for admission are sold. Other performance areas are free, and side streets often become the venue for impromptu dancing from groups awaiting their turn on one of the stages. When their time comes round, the dancers proceed onto the stage, dancing in procession from one end to the other. As one ren leaves the stage another is already beginning their dance at the other end. While the basic movements of the dance are predetermined, groups use formations and changes in tempo to add distinctiveness to their performance. It is common for the ren to pause mid-stage while otoko-odori dancers in the group carry out an energetic form of the dance. 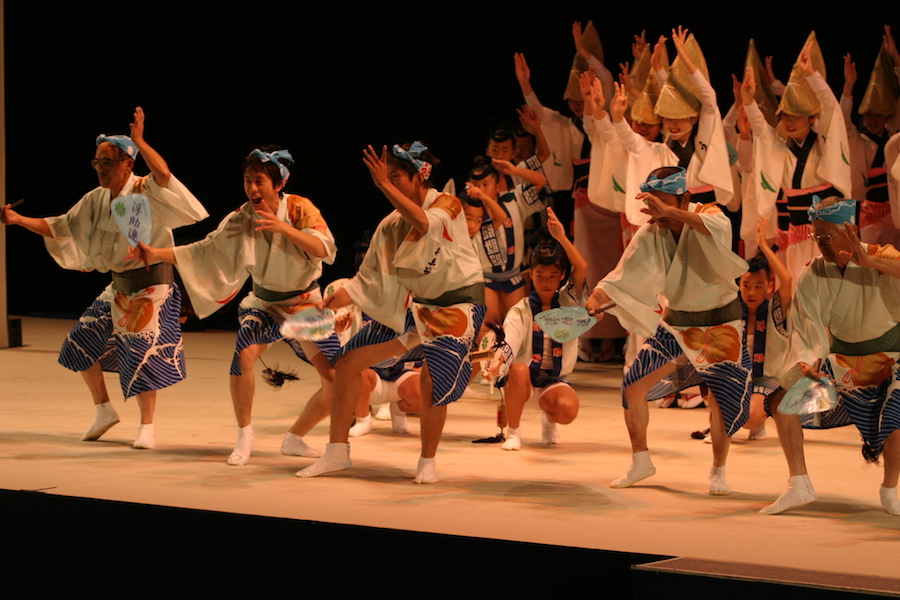 (An indoor performance of Awa Odori)

At other times of year, Awa Odori performances can be viewed at the Awa Odori Kaikan in Tokushima City.

Awa Odori can be witnessed at obon festivals across Japan. In Tokyo, the largest dedicated Awa Odori festival is in Koenji, Suginami ward. Information can be found on their website (Japanese only)