Preparing for the New Year

Christmas decorations come down quickly in Japan to make way for the most important Japanese holiday – New Year’s. Preparations for the end of the year are many and require time. Offices and homes are cleaned, accounts are settled, and Nengajo (年賀状, New Year’s greeting cards) are sent to friends, family and acquaintances. Along with this, homes and businesses prepare to greet the New Year with decorations. Three common decorations are the kadomatsu, shime kazari, and kagami mochi. These share similar yet distinct functions. While methods of arrangement vary, below are some typical ways in which these might be found. 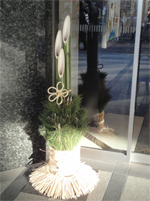 Kadomatsu are arrangements of three cut pieces of bamboo, pine boughs, and other lucky or decorative plants which are placed outside the entrances to homes and businesses. Kadomatsu vary in height and size. Their function is to provide a place for the New Year’s gods (Toshigami) who bring longevity and good fortune to alight. Pine trees have long been associated with the resting place of gods, thus their use in kadomatsu. The tradition of placing two of these on each side of doorways originated in the Edo Era.

Shime kazari also serve to welcome the New Year’s gods. These are hung above doorways and signify that the place inside has been cleaned or purified. The rope (“Shimenawa”) and white paper (“Shide”) are often seen in front of shrines. Shime kazari are decorated with ferns, leaves from the yuzuriha plant, oranges, and other lucky plants. 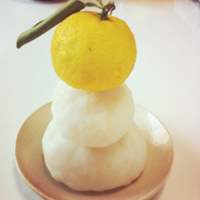 Kagami mochi, consists of two round pounded rice cakes (mochi), and is arranged with red and white hanshi paper, and the leaves of a yuzuriha or other plant. On top rests a mandarin orange (mikan). These are often placed in an alcove (toko no ma) within the house, in individual rooms, or at the entrance to the home. Along with its celebratory functions, mochi is a sacred food. Because of this, kagami mochi is given as an offering to the gods. “Kagami” in Japanese means “mirror,” a traditionally round object, hence kagami mochi’s name and shape.