Expats with food allergies know that they need to be extra careful when dealing with foods in a new country. Besides the obvious language barrier they deal with when trying to decipher the backs of food labels, labeling regulations may be entirely different from their native country.

In Japan, the MAFF (Ministry of Agriculture, Forestry, and Fishery) has designated seven foods which manufacturers are legally obligated to indicate on the label when they are included as ingredients. These foods have been selected either because a significant portion of the population is allergic to them, or due to the severity of reaction symptoms. They are shrimp, crab, wheat, buckwheat, egg, milk, and peanut. In addition, the MAFF has also indicated twenty additional foods that it recommends manufacturers to display: abalone, squid, salmon roe, orange, cashew nut, kiwi, beef, walnut, sesame, salmon, mackerel, soybean, chicken, banana, pork, matsutake mushroom, peach, yam, apple, and gelatin.

Although the first set of seven foods must be indicated on the label when they are included in a product, it should be noted that they can be displayed in a number of different ways. If it is common knowledge that a certain ingredient is included in another, then it is not required that that ingredient be included on the label. For example, since it is widely known that eggs are an essential ingredient in mayonnaise, manufacturers are allowed to display only the inclusion of mayonnaise. There are also two different methods for listing common allergy foods. They can either be included in parentheses next to the ingredient that contains them, or they can be displayed in parentheses together at the end of the list of ingredients.

While those with some Japanese language skills may be able to identify these for themselves, most ingredients will not be displayed in English. There are cases however where the pictures of common allergy foods are displayed on the back of the package. These will allow people to easily identify a problem food regardless of their Japanese language ability. In addition, the label will often indicate when a product has been produced in the same factory as a product containing a common allergy food. 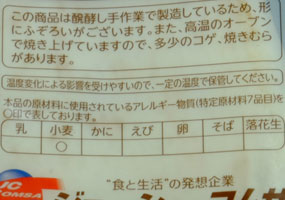 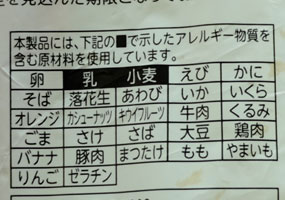 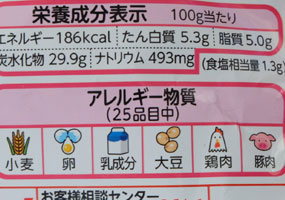 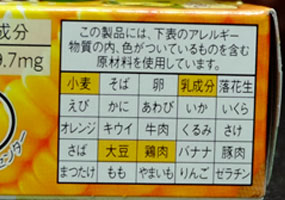